NARRAGANSETT, R.I. — I arrived at the snow-covered beach an hour before my heat was supposed to start and had been out of my car for roughly 48 seconds when a one-armed man with a cigarette dangling from his lips began barking at me through a bullhorn to get my wetsuit on and hurry up about it because I was holding everyone up.

I gathered he was one of the organizers of this strange gathering — the 53rd annual New England Mid-Winter Surfing Championships, the oldest such competition in the world — though organized is not really a good word for anything to do with this event.

It was designed to be a punishment.

But to understand surf culture in New England, you need to realize that the goal was not to punish the participants. Anyone who surfs year-round in the Northeast is perfectly capable of tormenting themselves.

No, the idea was to punish the lucky cowards, “the rich [expletives] who got to go somewhere warm to surf in the winter,’’ according to the mischievous man known as Peter Pan (nee Peter Panagiotis), a local surfing legend who created the competition out of spite in 1968, when he was just 18. Back then, New England had a fiercely contested local competition circuit, and starting the season in winter would put the snowbirds behind in the points chase. How dare they skip frostbite season.

Nowadays, everything is much looser, by design. Panagiotis, who has been the director of the Eastern Surfing Association’s Southern New England district since 1972, said other districts run contests with the clockwork rigidity of swim meets, and it turns people off, so he aims for a more laid-back approach.

How laid-back? Panagiotis told me several times that I’d be in the first heat of the day, starting at noon. But at 11:00:48, here came Mario Frade and his bullhorn commanding me to suit up quickly, as if that’s even possible when dealing with a winter wetsuit.

By the time I’d wrestled myself into a hooded 6 millimeter neoprene suit, 8 millimeter booties, and 7 millimeter mittens, I was pouring sweat as a couple walked by with their dog and the guy shot me a look.

“You’re one of those crazies, huh?’’ he said. Yes and no. The truth is that modern wetsuits are amazing. There’s no avoiding the painful brain freeze if you take a bunch of waves on the head, but I surf a lot in the winter and with rare exceptions I paddle in because I’m exhausted, not because I’m cold. That said, each time I prepare to step into the North Atlantic in winter, something deep in my body tries to veto the decision, the same primal reflex that warns me not to get too close to the fire or the edge or the Oreos.

My buddy Chad was in the competition as well — all surfers are required to have a bro named Chad — and we kind of stood off to the side, confused, as Frade explained the rules to the seven men in the longboard heat. And by rules I mean martial law.

Narragansett Town Beach is 2 miles long, but we were set up on the southern end, where the best waves break and where a crowd of locals were already surfing. “I want you all to paddle out together, and tell all the surfers out there right now to get out of the way,’’ Frade said, as if hardcore winter surfers would cheerfully cede their break to a bunch of outsiders because they have jerseys on.

Clearly, Frade didn’t have much confidence in this plan either, for he immediately began explaining his bonus system: We would be scored on our two best waves, but if the locals refused to clear the break and cut us off when we went for a wave, we would receive five bonus points if we rammed them with our boards.

I thought he was kidding. He was not.

Frade is another local surfing legend. He was the guy to beat in the ’70s, before a motorcycle accident cost him his arm. Now he’s known as a hard-charging bodyboarder, and local legend says he’s been known to catch a wave with a cigarette still dangling from his lips.

I trailed behind everyone as we paddled out to where the waves were breaking, figuring I’d let my competitors handle the business of telling the locals to move, when suddenly the siren went off to start our heat. I could see a small wave sneaking through everyone on the outside, so I spun and caught it. And just like that, I was winning my first-ever surfing competition.

Don’t worry about where I finished. We’re not here to talk about me. Let’s talk about Froth Lord.

Froth Lord’s real name is Rigby Bennett, and he’s a 21-year-old local who tried to hog every wave that came through, which is a no-no in surfing etiquette. When I gently pointed this out to him, he told me, “That’s why they call me the Froth Lord.’’ Then he took off on another wave.

I kinda loved that he was owning the bad boy shtick, and as if on cue, an errant surfer paddled out among the competitors. For some reason, the man had entered the ocean in February not assuming there would be a surfing contest going on. Froth Lord saw his opportunity and immediately went hunting for his five bonus points. He took off on a wave and just missed ramming the man with his board.

They both fell, and the Froth Lord came up fully hot, screaming at the guy to paddle down the beach immediately. “Don’t even look at me,’’ he yelled at the guy, as I was quietly designing Froth Lord T-shirts in my head.

I caught a few more so-so waves. Froth Lord caught about a million. And before I knew it, the siren sounded ending our 20-minute heat.

There was apparently a medal ceremony, which I’m sorry I missed because Froth Lord was said to be furious that he did not win. But a few days later, Panagiotis sent me the official results, and it showed I had placed second in the Senior Longboard division.

Don’t ask how many people were in that division. Don’t even look at me.

Billy Baker can be reached at billy.baker@globe.com. 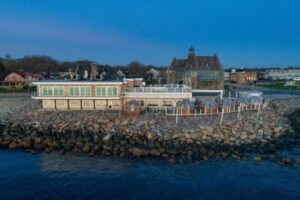 Facebook/Coast Guard House Rhode Island’s naturally known for seafood, and we’ve got some of the best in the entire country. Did you know, however, that

The Best Rhode Island Beaches for Every Occasion

The Ocean State lives up to its name. When it comes to beaches, it’s hard to beat the variety of those in Rhode Island. Despite

80 percent of R.I. ranks among nation’s healthiest communities, according to US News & World Report

Website for marketing purposes only. May be subject to change at any time.